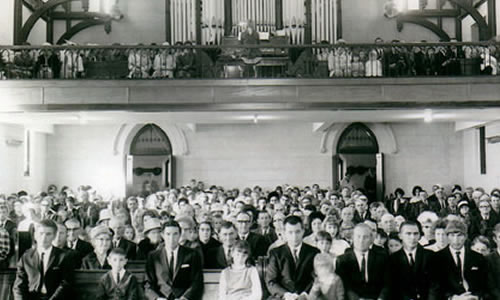 The Reverend Harry Carrow was curate of St. Andrew’s church Loxton from 1842-1850, when he became the rector until 1865. The descendants of Harry Carrow together with Fisher Tomes are displayed on the outlined family tree.

He and his family lived in the old Rectory, (the present one was built in 1873). In 1851 he was living with his second wife Amelia, one daughter Elizabeth and three sons Richard, William and Joseph. They had four servants; Catherine Bine Wilson who was governess to the two older children; Charlotte Richards Stone who nursed the two youngsters; Charity Baker was the cook and Ann Henderson the house and parlour maid. In 1861 the family consisted of Harry and Amelia, his wife, Elizabeth his elder daughter and a second daughter Jane. Harry’s three elder sons were not there and were probably away at school. There was a fourth son George Edward, age 2. They had two servants Henrietta Day, cook and Ann Good, nursemaid.

William Galton Carrow, the second son, was a Commander in the Royal Navy and married Miss Fanny Tomes, the daughter of Fisher and Mary Ann Tomes of Long Marston (Marston Sicca), Warwickshire. The marriage took place at the Parish Church, Weston-super-Mare, Somerset. Fanny was the only surviving child of Fisher and Mary Tomes, her brother John died at the age of 7 months and her elder sister died at the age of 10½, when Fanny was 9 years old.

Fisher Tomes inherited and lived in King’s Lodge on the Marston Estate, so called because Charles II had hidden there on the night of 10th September 1651. Charles had been ‘on the run’ from the Parliamentarians, following his attempt to regain the throne and defeat at the Battle of Worcester on 3rd September, before eventually escaping back to France from near Brighton on 15th October. Fisher Tomes renovated the house and when he died in 1879 he left the Marston Estate, value �421 17s 10d to Fanny, and her husband, William Carrow, who later made even further improvements to King’s Lodge.

William and Fanny Carrow lived in South Kensington and later moved to King’s Lodge, Warwickshire. William died in 1912 and left stocks and shares worth �40 18s to Fanny. The witnesses to his will, made in 1885, were two Loxton girls, Annie Palmer and Ellen Sevier.

Fanny died the year after William and in a codicil to her will left the proceeds of the sale of the stocks and shares to May Ward (neé Carrow), the daughter of Richard Carrow, and to Alice and Henrietta Carrow, the daughters of George Carrow. William and Fanny did not have any children so, under the terms of her marriage settlement, the profits from the sale of the Marston Estate went to Clement Thurston Tomes, the son of her first cousin Arthur Tomes.