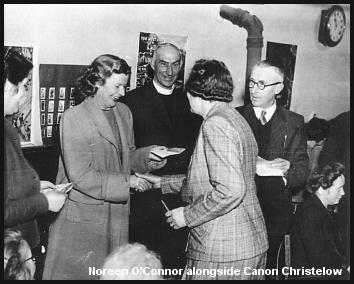 In 1899 Miss Friederika Alwine Maria Buls came from Germany to be a ladies maid to Emmy Maria Franziska, the wife of Mr. Frank Tiarks. When World War 2 started the Tiarks were living in Loxton and Mrs. Tiarks was an invalid. As she was German Miss Buls was not allowed to work in England during the war and was interred. Miss Noreen O’Connor, a State registered nurse, was engaged to nurse Mrs. Tiarks and after she died in 1943, Miss O’Connor became nurse-secretary to Frank Tiarks, who was confined to a wheel chair after a hunting accident. After the war Miss Buls returned to the district but Miss O’Connor stayed on as Frank Tiarks’ housekeeper, nurse and general companion. She accompanied him on holidays to Persia and South Africa, and drove him around in a specially adapted car. They were often seen at cricket matches and horse shows in which Frank Tiarks took a great interest. 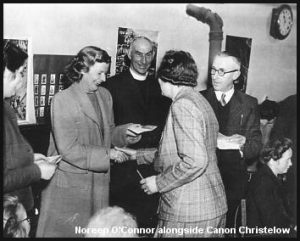 Miss O’Connor was a very popular figure and is remembered as a person who was very kind and took a great interest in the activities of the village. [Image: Noreen O’Connor alongside Canon Christelow]She took a keen interest in the village school and would make chicken broth for any child who was ill. In 1947 on the occasion of the Royal Wedding between Princess Elizabeth and Prince Philip, Frank Tiarks and Noreen O’Connor held a party for the school children at Loxton Lodge. She also distributed savings stamps at the school at Christmas on behalf of Frank Tiarks, and after his death she made cakes for the children for an impromptu party and gave each child a small gift. She was well known as a fundraiser and helped to raise over £1,200 for an extension to the village hall in 1952. In June 1954, just three months before the tragedy happened she helped to transport the schoolchildren to Weston-super-Mare to see a film of the Royal tour of Australia.

Frank Tiarks died in 1952 and in his will he bequeathed a cottage at Loxton known as ‘Gardeen’ to Miss O’Connor. He also left her cars, his shares in the Callow Rock Lime Co., Ltd and the income from land which he left in trust to his grandson Caspar Tiarks.

After Frank Tiarks’ death Miss O’Connor moved into ‘Gardeen’ and asked Miss ‘Marie’ Buls to live with her. Miss Buls, aged 77, had had one small stroke, had also broken her leg and was confined to her bedroom. Miss O’Connor, aged 46, nursed Marie with great care and affection.

The story goes on…

Read more about the The Incident

Mel Blanc (the voice of Bugs Bunny) was allergic to carrots.
Joe's