The Lord of the Manor of Loxton Erasmus Galton, J.P.(1), D.L.(2), was the brother of Sir Francis Galton, cousin to Sir Douglas Strutt Galton, and half-cousin to Charles Darwin. Erasmus was interested in agriculture and wrote papers for scientific journals. He was the first chairman of the Loxton and Christon Board School and on his regular visits to the school to inspect the registers, took cake and sweets, which he distributed amongst the schoolchildren in the playground. [Image: Erasmus Galton taken in the Loxton Valley near Christon c.1900]He occasionally donated equipment to the school and regularly taught Geography. During his time on the School Board he frequently gave the schoolchildren savings stamps and an annual outing in Loxton Wood. He provided the cottagers with an annual supply of coal and an extra supply in very cold winters. The photograph alongside c.1900 was taken in the Loxton Valley near the village of Christon. 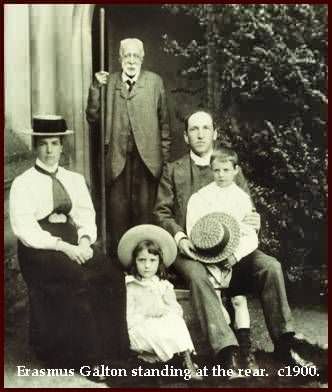 In 1841 Major Erasmus Galton was living in the manor house with his sister Millicent. He is not listed in the census returns as a resident in 1851, 1861 or 1871, so it is possible that he was away serving in the army. In 1881 and 1891 Erasmus was living at a cottage in Loxton Wood with just his valet, James Morrish for company. The wife and children of James Morrish were living at Loxton School House with the village schoolmistress.

The photograph below taken c.1900 shows Erasmus standing at the back of the Reverend Page and his family. He died on the 23rd day of February 1909, aged 94 years, at The Royal Hotel, Leamington in the County of Warwick. In his will he asked to be cremated and that no mourning of any kind should be used at his funeral. [Image: Reverend Page & family with Erasmus Galton at the rear c.1900]Money was left to several hospitals, including �0 to Weston-Super-Mare Hospital. He made several bequests to his friends, various members of his family as well as servants and tenants at Loxton:

Eliza Sevier, Francis Scott and Mrs Joseph Every (Avery), who each rented a house and garden at Loxton were entitled to live in their cottages for the duration of their life for a rent of 2s 6d(3) (4) per annum. They were not allowed to have lodgers or to sell any beer, cider or other intoxicating liquor. Eliza Sevier also received 6s 0d per week for life, payable every Saturday.

John Lethbridge-Galton who also inherited Claverdon Leys, Warwickshire, made his main home at Stratton End, Cirencester, Gloucestershire, and the Loxton Estate was put in the charge of William Starks. At the beginning of World War II William Starks was given an undisclosed sum of money to buy Savings Certificates and to avoid any death duties. John Lethbridge-Galton, a bachelor, died on 17th June 1952. In his will he made bequests to his relatives and to his servants at Claverdon Leys. There were two employees from Loxton who received bequests:

Louie Southwood was left � and William Starks received an annuity of � in recognition of the faithful way that he looked after the estate from the time of Erasmus Galton. He was entitled to live in his cottage at Loxton rent free for the rest of his life.

The rest of John Lethbridge-Galton’s real and personal estate was left to his nephew and niece with instructions that it was to be sold. He commented in his will that crushing taxation, high wages, interference by local and Government authorities and the five day week for industrial workers, when farm workers were still working seven days a week made conditions difficult. He prophesised that because of estate duties that tenant farmers would in future become occupying owners.

In every episode of Seinfeld there is a Superman somewhere.
Joe's