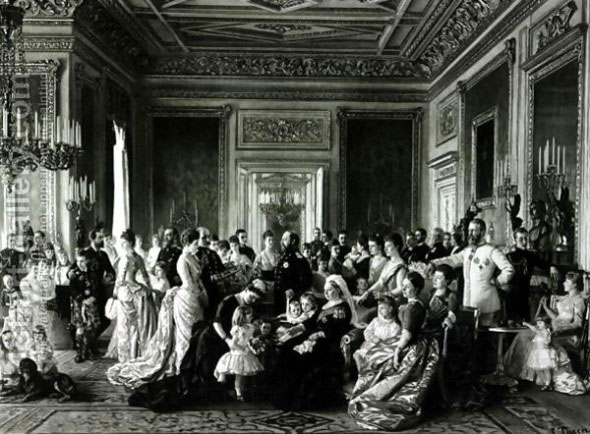 In 1887, many towns and villages all over England celebrated the Golden Jubilee of Queen Victoria, who succeeded to the throne on 21 July 1837. On the 3 May 1887 the first and smallest village in the local administrative district of Axbridge to commemorate the event was the neighbouring village of Christon. A luncheon was held and the whole community of eighty men, women and children enjoyed beef and mutton in the wagon-shed of Mr. Charles House, a local farmer. The nearby village of Compton Bishop held their festivities later in the month, when the men had a dinner at noon and the women and children sat down to a meat tea late in the afternoon.

Loxton was very fortunate because they celebrated the event twice. The first at the end of May 1887 was by courtesy of the Lord of the Manor, Major Erasmus Galton. At one o’clock Major Galton took the chair at a dinner, when one hundred of his tenants, their wives and children sat down to a dinner in the upper room of Mr. W. Tilley’s wagon-house, very tastefully decorated by Mrs. M. and Miss Merry. Mr. Tilley, Mr. H. Dibble and Mr. J.H. Padfield organised the meal that had been skilfully cooked and prepared smoking hot in the local farmhouses. Mr. Galton proposed “The Health of Her Majesty” and Mr. Tilley replied by toasting “The Giver of the Feast”. In the afternoon sports and games were played in the orchard next to Mr. Tilley’s farm and afterwards a party of about sixty children went back to the wagon-house for tea. After tea there were more games and dancing until darkness fell.

The second celebration was on 21 June 1887 when the whole day was organised by the Tiarks family. The grounds of the rectory were decorated with flags and the village with bunting. There was a service in the church at noon, attended by a very large congregation. The interior of the church was decorated with the Royal Coat of Arms dated 1726, which belonged to the church, surrounded by a wreath of laurel and flanked with flags over the oak screen. The bells were rung before and after the service. The rector Rev. J. G. Tiarks gave a dinner to thirty of his tenants and friends, when the only toast allowed was “The Queen”.

In the evening, the parishioners formed a procession and entered the grounds of the rectory singing the National Anthem carrying flags and the Royal Coat of Arms. They were given tea by courtesy of the Rev. J. G. Tiarks and Mr. Henry F. Tiarks. After tea the rector took a photograph of the whole group, then dancing and refreshments went on until mid-evening and the National Anthem was sung again. Nearly everyone assembled for the beacon fire on West Hill, Loxton. The less active members of the village watched the proceedings from the lawn at Loxton Lodge. At 10 o’clock a signal rocket was fired and the beacon fire was immediately lit, burning very clearly and visible to neighbouring fires on the surrounding hills. Mr. H.F. Tiarks organised a fireworks display that was very much appreciated. The day ended late in the evening with the National Anthem being sung for the third time.

The first zoo in the USA was in Philadelphia.
Joe's